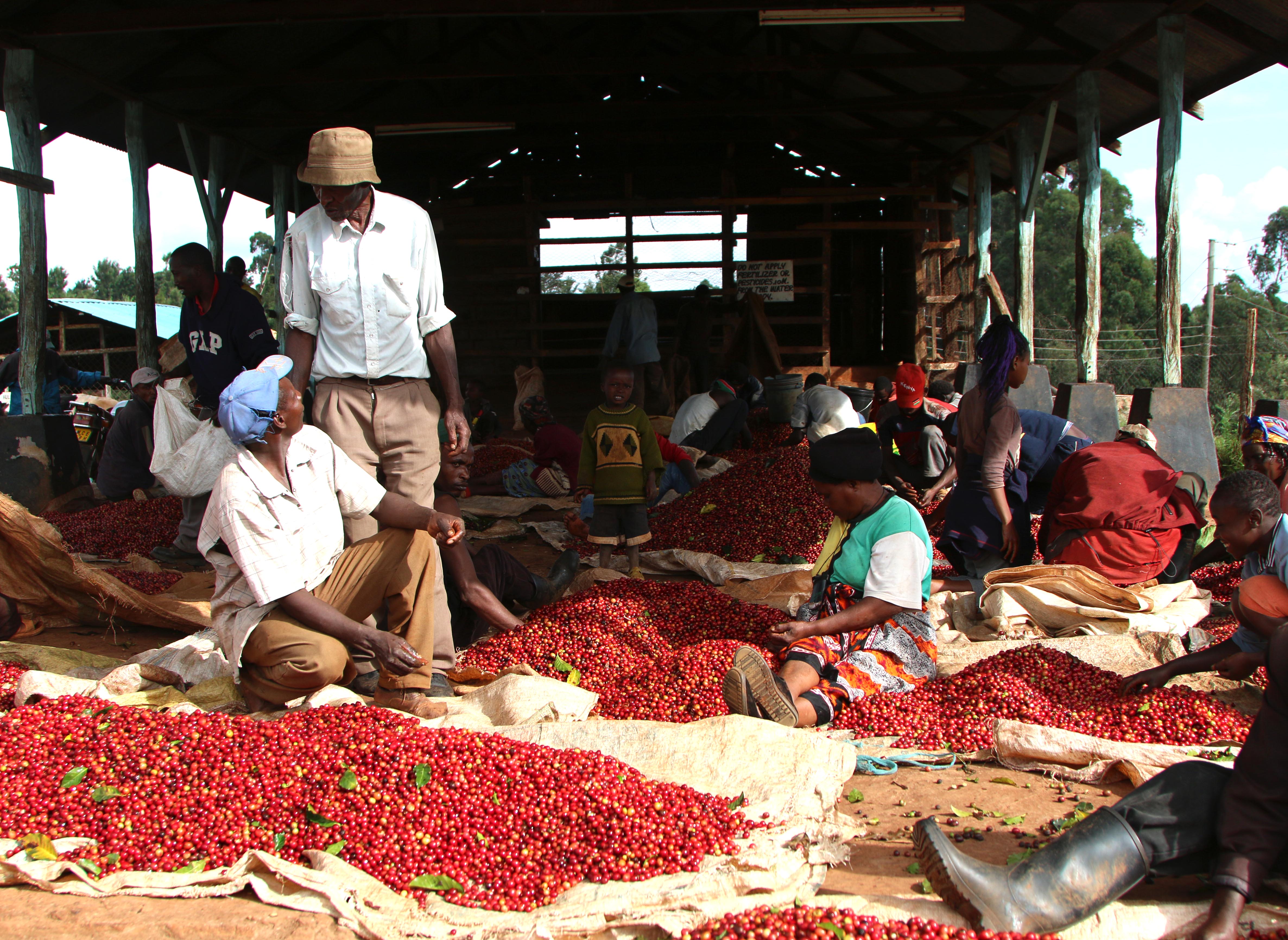 In our opinion, Kenya has one of the most interesting and complicated histories with coffee: Despite sharing a border with the “birthplace of coffee,” Ethiopia, Kenya was one of the latest places planted in coffee, nearly 300 years after the plant was first cultivated for sale. In fact, the varieties that were brought to Kenya had circumnavigated the globe before they found their way back to the African continent, mutating in various climates to create a profile that, once adapted to the rich soil around Mt. Kenya, resulted in the singular profiles that this country has to offer.

The first plants were brought to the country by Scottish and French missionaries, the latter contributing what would be known as French Mission Bourbon, transplanted from the island of Bourbon (now called Reunion) to Tanzania and Kenya in an attempt to finance their efforts on the ground. The Scottish, meanwhile, brought strains from Mocha, the different varieties contributing to the dynamic quality of the coffees in the country even to this day.

Established as a British colony specifically for its moneymaking potential, Kenya became a coffee powerhouse as a way for the empire to control both the tea (already a Kenyan staple crop) and coffee markets worldwide. By the 1920s, as Europe demanded more and more coffee, the cash crop became a major Kenyan export, and in the 1930s the auction system was developed, ostensibly to democratize the market for farmers. After Kenya achieved independence from Britain in the 1960s, coffee took on a greater importance to small landholders, many of whom were given coffee farms in the redistribution of private property from large colonial and government-owned plantations.

In the 2000s, approximately 85% of the coffee farms in Kenya are owned by natives to the country, though European influence is still evident in larger estates. Today, the majority of Kenyan farmers tend small plots, growing as few as 150 coffee trees trees: They bring cherry to centrally located mills, where their coffees are weighed, sorted, and combined to create lots large enough to process and export. There are also privately owned estates, though fewer than during colonial days: The average estate grows around 10,000 coffee trees.

Most Kenyans prefer to drink tea in their homes, and cafe culture largely exists for tourists and in the major cities.

Coffee is sold by way of two main marketing systems in Kenya: by auction at the Nairobi Coffee Exchange, or through direct sales, often called “Second Window.” Since the establishment of the auction system in the 1930s, the majority of Kenyan coffee has been traded that way. It’s evolved from traditional “open-outcry” bidding on the market floor to a largely silent system, with an electric trigger for each trader to hit during bidding. Through this system, prices of highly sought-after coffees can soar, as agents work to outbid each other on the coffees that are available each week.

The auction system works like this: Each estate or co-operative society works with a marketing agent, whose responsibility it is to bring the coffees to auction to sell to the highest bidder. The marketing agent will charge somewhere between 1.5–3% of the price of the coffee, and there is also a government tax imposed on the sale of coffee. Marketing agents tender samples of the milled coffees to interested bidders, and auctions take place on Tuesdays throughout the year in Nairobi; the coffees that are due to be auctioned any given week are printed in a catalogue available through the Exchange. Many exporters will bid on lots at auction and sell them privately to importers and roasters.

The introduction of the “Second Window” created an avenue in which a farmer and buyer (such as a roaster or importer) can negotiate a price somewhat separate to the bidding at auction, typically by discussing and agreeing upon the deal before or during the harvest. Some exporters will also cup and directly purchase coffees from their associated marketing agents or mills, negotiating a price based on the previous week’s auction prices for specific grades (AA, AB, PB, and so on).

The first thing that comes to mind when one thinks about Kenyan coffee is “acidity,” but what we are looking for is not simply mouth-puckering brightness or one-note citric acid. Generally, we seek out complex, refined cups that show black currant, grapefruit or kaffir lime, mouthwatering notes of tomato or tamarind, and sparkling tropical fruit like pineapple. The famous SL varieties—SL-28 and SL-34—tend to be juicy and dynamic, while French Mission is typically a more creamy and citric cup.

A note about Kenyan “classic” varieties: The “SL” in SL-28 and SL-34 stands for Scot Laboratories, which was hired in the 1930s to undertake a series of selections and tests on Kenyan coffee varieties in order to determine which had the greatest potential for success, both in terms of quality and cultivation. Scientists identified more than 40 trees of different types, giving them a number with “SL” for classification—these varieties are considered selections, not, strictly speaking “hybrids,” though many of them were the genetic offspring of cross-pollinated types and spliced cultivars.

A more modern variety and a direct result of hybridization is Ruiru 11, which is a combination of Timor Hybrid variety (an interspecific hybrid of Arabica and Robusta) and Rume Sudan, a cultivar that is resistant to coffee-berry disease, which is a common plight in the country. Ruiru 11 has been available for sale since 1986.

Aside from the varieties grown in the country, and the altitudes that range from 1,400 to more than 2,000 meters above sea level, the special processing that most Kenyan coffees undergoes is part of what contributes to its particular flavor profile.

Here’s a general breakdown of how processing happens in Kenya (though, truthfully, there is no one “standard” for how a factory or washing station handles its coffee): Farmers will bring their cherry to the factory, where it is weighed and put into the hopper with the rest of that day’s collection. (The farmer is given a receipt for the value of the coffee.) The coffee is depulped using one of two types of equipment: A single-disc depulper, which directs all of the coffee into a single fermentation tank, or a pre-grader/multi-disc depulper, which uses multiple water tanks to pre-sort the coffees by density before and after the depulping, which allows the smaller grades to be depulped again as needed. The single-disc depulping is more common at estates than at the factories.

Factories will ferment every grade of parchment coffee dry in its mucilage for 24–48 hours, then move the coffee through water channels to separate washing tanks, where the softened mucilage is sloughed off. Premium AA lots are sometimes sent to holding takes to be submerged underwater for an additional 24 hours.

The tanks are drained, and the coffee is given a quick “pre-dry,” or “skin dry,” laid out in full sunlight in thin layers on raised beds for about six hours; this is to prevent the parchment from cracking. The beans are then moved to raised beds where they are spread in thicker layers, and allowed to dry for 7–10 days. The coffee is typically dried to 11–12% moisture.

Check out Kenya’s full profile from Cafe Imports where we source our beans.